Direct Lightning Strikes: Only Part of the Lightning Equation

Different types of strikes will have different levels of energy resulting in differing degrees of damage to the affected structures, electronics and electrical systems.

In 2016, according to the Insurance Information Institute, over $825 million was paid out in damage claims to homeowners alone.

However, direct strikes are only part of the dangerous and damaging lightning equation.

You May Not Realize...

Strikes to the ground or cloud-to-cloud events should also be of concern especially if electronic equipment is unprotected or under-protected.

These events can create very strong and damaging surges that can bring havoc to unprotected electronics and electrical systems.

These strike scenarios may not be as powerful, damage wise, as a direct strike to a building structure. However, they can be as dangerous to sensitive electronic equipment none the less.

Strikes to earth ground can produce very strong transients. Ground surges produced from nearby strikes can destroy electronics and electrical systems. The strikes enter unprotected circuits through the facility ground, equipment systems ground or any conductive material (pipes, conduit etc) connected to a building or other structure.

Cloud-to-cloud lightning is capable of inducing electrical field intensities of thousands of volts. If this happens across an unprotected power, telephone, data or coaxial lines, the result can be severe system damage or complete destruction. 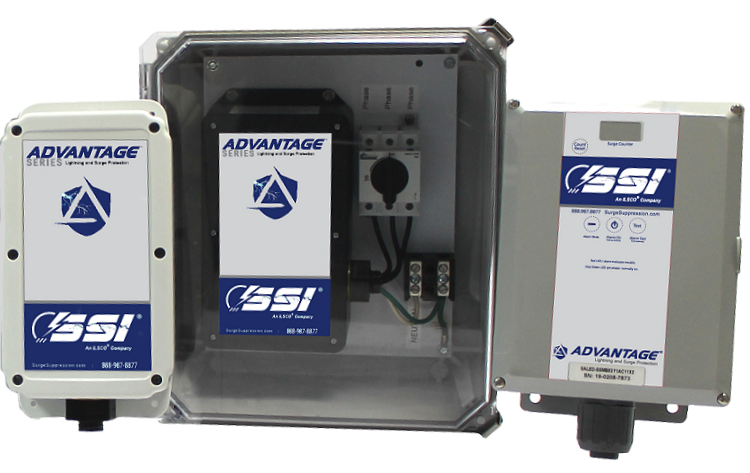 Rarely does lighting strike once. It's usually multiple, almost simultaneous strikes. With the potential for lightning damage, its critical to have sensitive electronics and electrical systems protected.

Lightning rods are structural protection equipment designed to mitigate the damage to commercial, industrial and residential structures. They play an important role in an overall lighting protection system.

However, without the proper lightning surge protectors correctly installed, valuable and sensitive electronics will not survive these damaging events.

The National Lightning Safety Institute (NLSI) recommends installation of surge protection systems, The NLSI provides some basic guidelines for protection applications. Lightning strikes are instantaneously damaging. These events are costly to the entire electrical system. Mitigation techniques should be viewed as a necessity - Not as an option.

Solve the Lightning Equation. Prevent damage to critical electronics and electrical systems. Get the Right Results from the Right SPDs installed in the Right Locations.

Our gear is... often imitated... but rarely duplicated...

This website participates in affiliate programs to earn revenue. This site is also a participant in the Amazon Services LLC Associates Program, an affiliate advertising program designed to provide a means for sites to earn advertising fees by advertising and linking to Amazon.com, Amazon.co.uk and Amazon.ca