Below are pictures and test results of plug-in Surge Protective Devices (SPDs) used in the test. These units were protecting the power side of a home network that included multiple electronic devices:

Each surge protector was in-the-field at some point during the 5 year span of our review. The three different SPD units are displayed below with results. Two of the surge protectors were replaced within an eighteen month period.

During the 18 month period: one monitor and 3 separate cable routers were damaged and had to be replaced. When the 3rd surge protector device was installed the problems ceased.

During the 18 month period: no power outages, lightning strikes or other large electrical anomalies of note were experienced.

However, one of the two devices did provide EMI/RFI filtration. EMI/RFI filtration is not the best option against RingWave Surges. SPDs that provide Sinewave Tracking or Frequency Responsive CircuitryTM are more effective.

Only the third SPD claimed and provided RingWave Suppression Technology.

The electronic equipment lost do to damage over the 18 month period:

First power surge protector used to protect equipment. Using this SPD, one monitor and one cable router had to be replaced over a 6 month period.

Second power surge protector used to protect equipment. Using this SPD, two cable routers had to be replaced over a 12 month period. 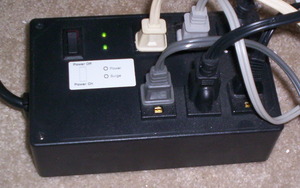 No equipment has been replace do to surge related damaged. Additional plug-in devices and a Portable/Travel SPD have been purchased as a result.

Test results from the Real World comparison leads to one simple conclusion.

All surge protectors are not created equal. SPDs do not always perform as claimed... in the field... regardless of what marketing materials might state. Remember, all three units were marketed to protect electronics. Only one succeeded.

It's important to realize there are different types of surge activity. As noted previously, there are Impulse type and RingWave type surges. In environments that produce both surge types, SPDs that protect against both Impulse and RingWave transients provide the best surge protection results. The Real World comparison certainly make this case. 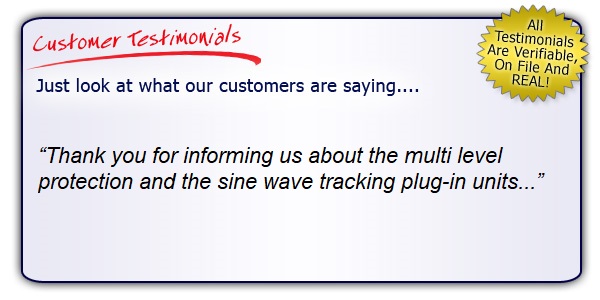 Regardless of SPD type: whole home, industrial, data line, telecom or plug-in device, there is no substitute for High Quality and High Performance.

Our gear is often imitated... but rarely duplicated...

Get the Right Gear!

This website participates in affiliate programs to earn revenue. This site is also a participant in the Amazon Services LLC Associates Program, an affiliate advertising program designed to provide a means for sites to earn advertising fees by advertising and linking to Amazon.com, Amazon.co.uk and Amazon.ca